Time to get your ticket to Umbraco-Festival Deutschland 2019!

When byte5 CEO Christian Wendler organised the first German Umbraco festival way back in 2012, he could not envision what it would evolve into seven years later: an MVP-awarded deep-tech conference that offers not only great content, but also great fun. With many sessions held in English, Umbraco-Festival Deutschland is a conference for both the international Umbraco community and the German-speaking audience.

Umbraco-Festival Deutschland, or UFD for short, will return to Frankfurt am Main on Friday, 5 April 2019, with 15 sessions and a keynote held by the Chief Unicorn himself, Mr Niels Hartvig. Speakers include Pete Duncanson, Carole Logan, Damiaan Peeters, and Claus Jensen from HQ. Topics range from GraphQL, AI and Azure Functions to testing and empathy in tech – and of course the then newly published v8 will be on everyone’s lips. There’s something for everyone!

UFD19 kicks off with a pre-party on the night before the festival (4 April) in the offices of byte5, the initiator behind the German festival. The festival itself runs on three tracks – and your favourite baristas Callum Whyte and Marcin Zajkowski will be streaming UmbraCoffee live from the conference. After dinner, the after-party moves on to the infamous UFD karaoke party which is where Slave & Eagle have their origins…

You don’t want to miss out on deep-tech content, insights on v8, meeting the friendliest community and lots of fun? Get yourself a ticket now! Tickets include festival swag as well as free drinks and food at the pre-party and the festival.

For more information on the festival, the speakers and their sessions visit https://umbracofestival.de/en.

Do you have your ticket?!

With only a handful remaining tickets and only a week more to get them, Umbraco Festival Germany (UFD) 2018 is right around the corner. Germany’s only Umbraco festival is back, and this year might be the biggest and most international one to date. 18 speakers from 8 different countries will gather in the beautiful city of Frankfurt am Main on 27 April 2018 to meet up with the friendliest CMS community on the planet. UFD is a bilingual event – English being the prime language – which makes the festival interesting for an international audience.

As every year, UFD kicks off with a pre-party (26 April 2018) in the office of host byte5. It is situated in one of Frankfurt’s most modern parts of town, Ostend, which is best known as being home to the new European central bank. Everyone holding a festival ticket is welcome to join the pre-party on fifth floor and enjoy the fantastic view on Frankfurt’s famous skyline while snacking tasty food from the buffet and sipping delicious cocktails.

Festival day begins with Christian Wendler, who initiated the festival way back in 2012, and community veteran Doug Robar, who will welcome everyone with a massive level five good morning. Attendees can also look forward to the keynote, given by no lesser than Chief Unicorn Niels Hartvig himself. Other speakers include Codecabin co-creator Matt Brailsford, GLUUG organiser Carole Rennie Logan, the organiser of UFD’s Polish sister festival, Marcin Zajkowski, and the CTO of Crumpled Dog, Jeavon Leopold. For more information on the sessions, check out http://umbracofestival.de/en/schedule-2018.

Besides tech sessions and talks on the latest news from the Umbracoverse, festival attendees will have a lot of time to chat with another, get to know new Umbracians or exchange their experiences with the CMS. After a day full of talks, everyone is invited to stay for dinner, cocktails and music at UFD’s after-party. Hardcore Umbraco fans move on to the local karaoke bar for some delightful tunes.

Check out http://umbracofestival.de/en for information on the speakers, their sessions, the venue and everything else you need to know.

Get a hold of one of the last tickets to Umbraco Festival Germany 2018 before they run out on Wednesday, 25 April! 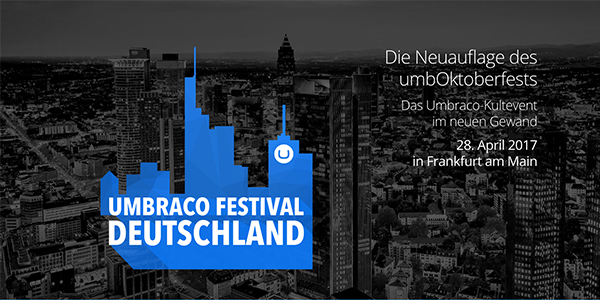 umbOktoberfest is back: with a new name, even more focus on tech topics and of course the steadily growing German speaking Umbraco community. Developers from Germany, Austria and Switzerland will, however, not be the only festival guests at the event that takes place on April 28th, 2017. Also top developers from many other European countries are going to be part of the open source CMS conference.

umbOktoberfest was established as the yearly German speaking Umbraco festival from 2012 until 2015 — successfully with the number of participants rising year after year. After a break in 2016, the event is now back with a completely new image, and lots and lots of tech sessions by international Umbraco experts. This is what the community asked for in their feedback following up to the previous event and it is what they get for the brand new 2017 premiere of Umbraco-Festival Deutschland on April 28th, 2017 (starting at 9am).

After a trip to Frankfurt’s Museum of Communications in 2015, when we organised the last umbOktoberfest, we went looking for yet another location with a special flair. What we found was a place in the city, combining this with a bit of history. Barckhausstraße 1, home of the Frankfurt Design Offices, was the location where the first German developers of Chris Robert’s Cloud Imperium Games (“Star Citizen”) worked, before the team relocated to their own office in the city’s newest district Europaviertel in 2016. A place that has proven great for creative minds and thus will fit the Umbraco community’s great tradition of creativity perfectly.

As for our VIPs: The Keynote on news and future plans about Umbraco will be presented by Mads Rasmussen and Rune Strand from Umbraco’s HQ in Odense, who are also going to there as Umbraco ambassadors for all CMS questions you might have. Other great personalities from the community attending are the lifetime MVPs Jeavon Leopold and Doug Robar, who have supported Umbraco and its community for many years. Specialists like uCommerce founder Søren Spelling Lund, security expert Jeffrey Schoemaker and developers from the byte5 organisation team add to the versatile lineup.

On the evening of April 27th, the day before the festival, we’re having our pre-party in the brand new byte5 office, which is free for all holders of festival tickets. If you want to make this day all about Umbraco, too: Come join Umbraco guru Jeavon Leopold with his German premiere of umbx community workshops in the morning. You can buy combined tickets for the workshop and festival on our ticket website.

More than 60 Umbraco enthusiasts from Germany, Switzerland, Austria and many other European countries have come together in Frankfurt to celebrate Umbraco and its community. Umbraco Festival Deutschland 2017 was the fifth event for German speaking developers.

It’s April 28th, quite a normal Friday in Frankfurt, Germany. Bankers are hopping on and off trains to get to their offices in the bank towers that make the inner city district and its skyline so famous all over Europe. What makes this Friday morning special is the fact that in the heart of all this everyday scene Umbracians from all over Europe are getting ready for the great German-speaking community event.

Umbraco Festival Deutschland 2017 is the fifth Umbraco festival in Germany organised by German gold-partner byte5, following four legendary umbOktoberfests from 2012 to 2015. The community has been growing rapidly since then and Umbraco is leaving more and more marks in Germany, Austria and Switzerland, too. For the first time ever, developers from all three German-speaking countries came together to exchange information on their favourite CMS and to celebrate the community, because this is what Umbraco is mostly about.

With speakers from Denmark (Mads and Rune from Umbraco and Søren from uCommerce), the UK (Theo and Kasper from Growcreate, Jeavon Leopold from Crumpled Dog and Umbraco community’s Happy Preacher Doug Robar) and the Netherlands (Jeffrey Shoemaker from Perplex) the festival did not only get more international but also way more informative since all of them have had great projects to show, stories to tell and information to share. How do you make Umbraco more secure? How do you use the system for whatever magic you want it to work for you? And what are the best practices when you’re using Cloud services for hosting your Umbraco sites?

So what do people take back home with them after this spring day in Frankfurt? Great tech sessions that have taught them a lot about their favourite CMS, brand new information on the 3 in 1 update of Umbraco 7.6, Forms 6.0 and Deploy 1 that was released only a few days later, and a great community experience that will surely be the basis of many friendships that will be renewed at Codegarden and, well of course at the next German festival coming up next year. The date is going to be released very soon!

What remains for us to say is a huge thank you to all the speakers' guests and supporters who have made another day in Frankfurt so very special! #h5yr, you guys!

You’ve missed the festival this year? All sessions will soon be available on byte5’s Youtube channel.