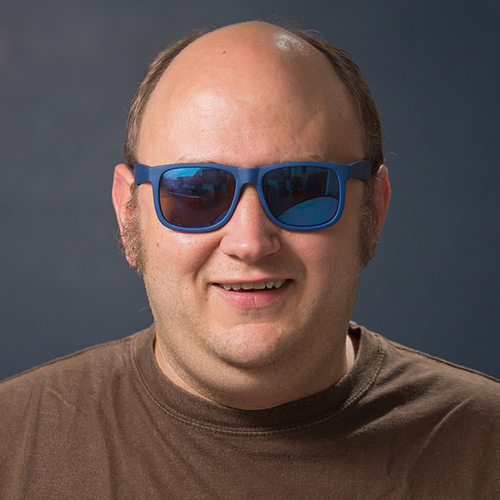 I remember when Crumpled Dog starting getting involved with Umbraco that, at various events and meetups, one of the most valuable learnings for me was when somebody else demonstrated their project structure and starter kit. I would take away bits and pieces I saw and began creating the "Crumpled Dog Core" which is both an approach to project structure and a starter kit.

Looking back, I think I was so interested in what others were doing because I wasn't happy with how we were approaching project structure. Now our "Core" is in it's fifth generation and I'm happy I think it's time to pay it back.

For this article I'm going to focus on the project approach and structure aspect and how over the last 18 months we've integrated various NodeJs and Ruby tools with our Visual Studio solution. As with many things Umbraco there is no right or wrong way to structure Umbraco projects; I'm going to outline how we do it and what and why it works for us.

Our team, like many, have a variety of different skills and people are using a variety of different tools, so our project structure is primarily designed for developers using Visual Studio on Windows. However, to include the whole team it also supports Windows users with WebMatrix and supports usable HTML & SASS contribution from our UX designers who are using various authoring tools on OSX!

When a new team member joins us (or has to perform a computer reinstall) these are the frameworks/tools/runtimes etc… we need to install for our projects to build and run. I'm going to focus on installing these on a Windows machine.

I realised after talking to various developers at CodeGarden 2015 who had tried to use some of these tools that actually getting them installed and correctly configured can be the biggest hurdle. So for each of these installers below I'll add a version test you can execute to ensure they were correctly configured, if you don't see the expected result try to logout/login or restart your machine before beginning further troubleshooting.

System Git is a requirement of Bower which we will install later on.

Download the installed and run, when presented with the "PATH" environment choose "Use Git from the Windows Command Prompt" unless you know what you are doing. 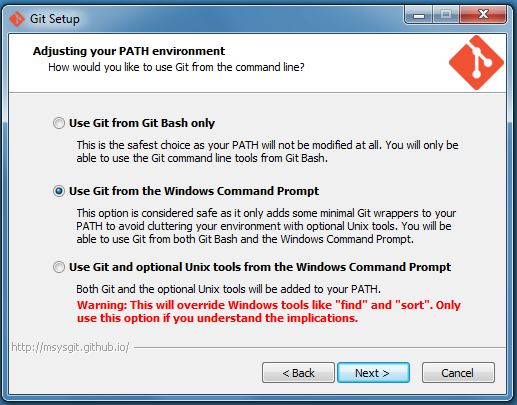 To test Git was installed and was configured properly, open command prompt and execute:

If successful you should see:

We use quite a few NodeJs modules in our build process.

Grab the download and run the installer. Once it's completed check it worked using the command line:

If successful you should see:

NPM is installed along with NodeJS so generally you don’t need to do anything. However sometimes we need to update NPM to its latest version, so here’s how you can do that if you want to.

To check your version of NPM executed:

Now with a little NPM inception it can update itself:

We use Grunt as our task runner, you can of course use Gulp if you know how to. You need to install the Grunt CLI as a global (the hyphen “g”) NodeJs module using NPM in a command prompt:

If you want to check the version of Grunt CLI you have:

Bower is a package manager for front end frameworks such as ResponsiveBP or jQuery. It downloads and tracks releases for you, meaning you don’t need to commit these third party libraries to source control. If you are familiar with NuGet, think of Bower as NuGet for Css/Js stuff.

To install Bower we use NPM again to install as another global NodeJs module.

To check the version and to make sure it’s available from the command prompt:

We need Ruby to compile SASS, there is a mountain of other amazing things you can use it for. To find other Gems explore https://rubygems.org/

Download the x64 installer, when presented with the “Optional Tasks” be sure to check the “Add Ruby executables to your PATH” 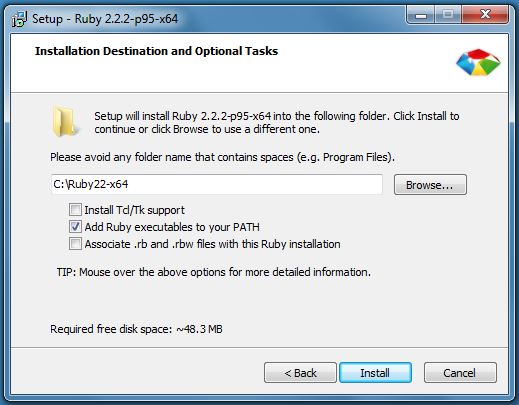 To check if Ruby was successfully installed and configured (you will need to login/logout before this will work):

Our front end developers use Sass for CSS pre-compilation because it’s Sassy and they like it. Sass is Ruby Gem so it’s easy to install from the command prompt:

To check Sass is available, its version and the release’s funky code name:

To get the most out of our project setup you will need Visual Studio, if you don’t have it already you can download the free & fully featured Community Edition. 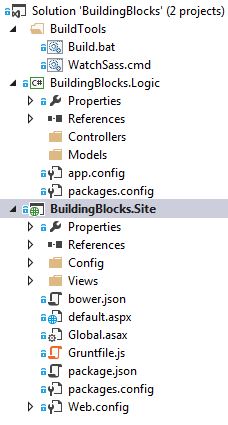 Generally front end developers are using Sublime Text for authoring Sass so we have a master Sass file called main.scss which will compile to main.css. There may be many further scss files but these will all be eventually included by main.scss.

main.scss should be located within the /css/ folder.

This project contains the deployable application and also Umbraco. We don’t ever add any C# code to this project, it should be limited to Umbraco itself and any packages that are needed.

There are three files in the root of this project that are used to configure our additional tools.

This file specifies the npm packages that are required, more info on package.json can be found on the following linkhttps://docs.npmjs.com/files/package.json

This file specifies which Bower packages we require for our project.

In our starter we have only Responsive specified. As Responsive has dependency on jQuery we know it will also be downloaded and can be used.

Grunt does the majority of the “grunt work” and our default task will execute everything non Visual Studio. The basic tasks we have are:

The fantastic thing about grunt is it can do pretty much anything if you find the right module.

This project contains all of our custom C#, typically these are models and controllers but can be anything. The “.Site” project has a reference dependency on this project so its dll output will be automatically copied to the bin folder on build.

Building and running the solution

1) We need to install the node modules specified in package.json. We need to do this only once or when a new module is added to package.json. To do this in command prompt we need to change to the “.Site” project and execute:

Once complete you will see a node_modules folder, this folder should be excluded from being committed to source control.

2) Run grunt, either from the command line or by using the excellent “Task Runner Explorer” extension for Visual Studio and double clicking the default task https://visualstudiogallery.msdn.microsoft.com/8e1b4368-4afb-467a-bc13-9650572db708

All the magic just happened in five characters in command prompt or a double click! Css/Js packages were downloaded by Bower and copied to where we want them and our Sass was compiled and created a main.css ready to use.

Now we need to add our assets to our normal Razor view and run our Visual Studio Umbraco project.

What about those WebMatrix and OSX users?

We do have junior developers or other staff who might be using WebMatrix to make some simple changes to Razor files for example.

If these machines do not have Visual Studio installed we need to install the “Visual Studio 2013 Build Tools”https://www.microsoft.com/en-us/download/details.aspx?id=40760. Once installed we have to copy the build targets files, these are located within our project \BuildTools\MSBuild\v12.0\ the contents must be copied toC:\Program Files (x86)\MSBuild\Microsoft\VisualStudio\v12.0\

Now we have a magical build.bat located in \BuildTools\MSBuild\, simply run this and it will perform everything I have described and even build the Visual Studio solution, now the “.Site” folder can be opened with WebMatrix.

To keep our OSX using UX designers integrated into our workflow, they will also install all of the prerequisites and then can simply execute npm install and then grunt in the “.Site” folder. They will generally create a “HtmlTemplates” folder inside the “.Site” folder into which they can craft their html, but importantly the Bower packages and Sass is all the same files being used in the Razor Views.

Included in the project is a appveyor.yml this contains all configuration required for AppVeyor to start building your project and ensuring you don’t have any broken builds.

Essentially AppVeyor will run the same build.bat described above.

More about appveyor.yml and AppVeyor can be found here http://www.appveyor.com/docs/appveyor-yml

Sometimes we do want to use a package that doesn’t have NuGet version (although this is becoming rarer). As we don’t want to commit our bin folder into source control we will have to perform the following:

A common problem due the ridiculous length of some of the paths of NodeJs modules.

Fear not, in \BuildingBlocks\BuildTools\ you will find another magic file, DeleteNodeModules.cmd run this and the folder will be gone.

In \BuildingBlocks\BuildTools\ you will find WatchSass.cmd, run this in the background and any saved changed .scss file in \css\ will trigger a Sass compile

I hope you’ve found this look into our project structure and the tools we use useful. It certainly has taken us a lot of experimentation to be able to utilise NodeJs and Ruby tools alongside and complementing a Visual Studio project.

You can download this complete starter solution from https://github.com/CrumpledDog/SkriftBuildingBlocks

Also in Issue No 5