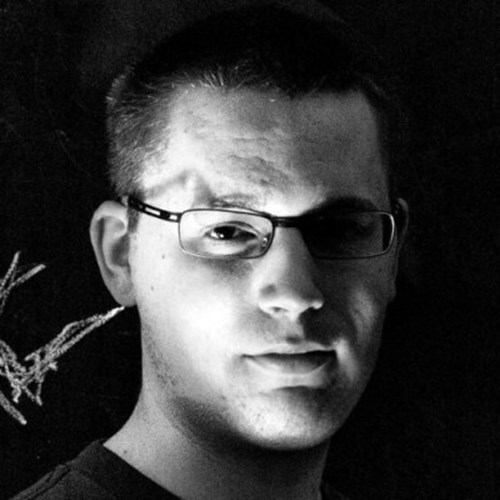 At Skybrud.dk we recently launched a new website for Danish Crown - one of the worlds largest meat processing companies. The website has a high focus on food targeted the regular consumer, and as such it also has a section for recipes (opskrifter in Danish).

The recipes section contains a search page to browse through all the recipes, and then an individual page for each recipe. For the search page, a random recipe will be shown at the top, and a box with the title of the recipe then overlays the image. With the example below, even though the green color from the cress (karse in Danish) isn't the most used color, the code will find colors with a high contrast that also work well with the white text (using the HSL color model and WCAG contrast ratio of two colors) - in this case the white text color and the green color from the cress. A few other examples could be an orange color from the carrots in the image, or a purple color from some beetroots. 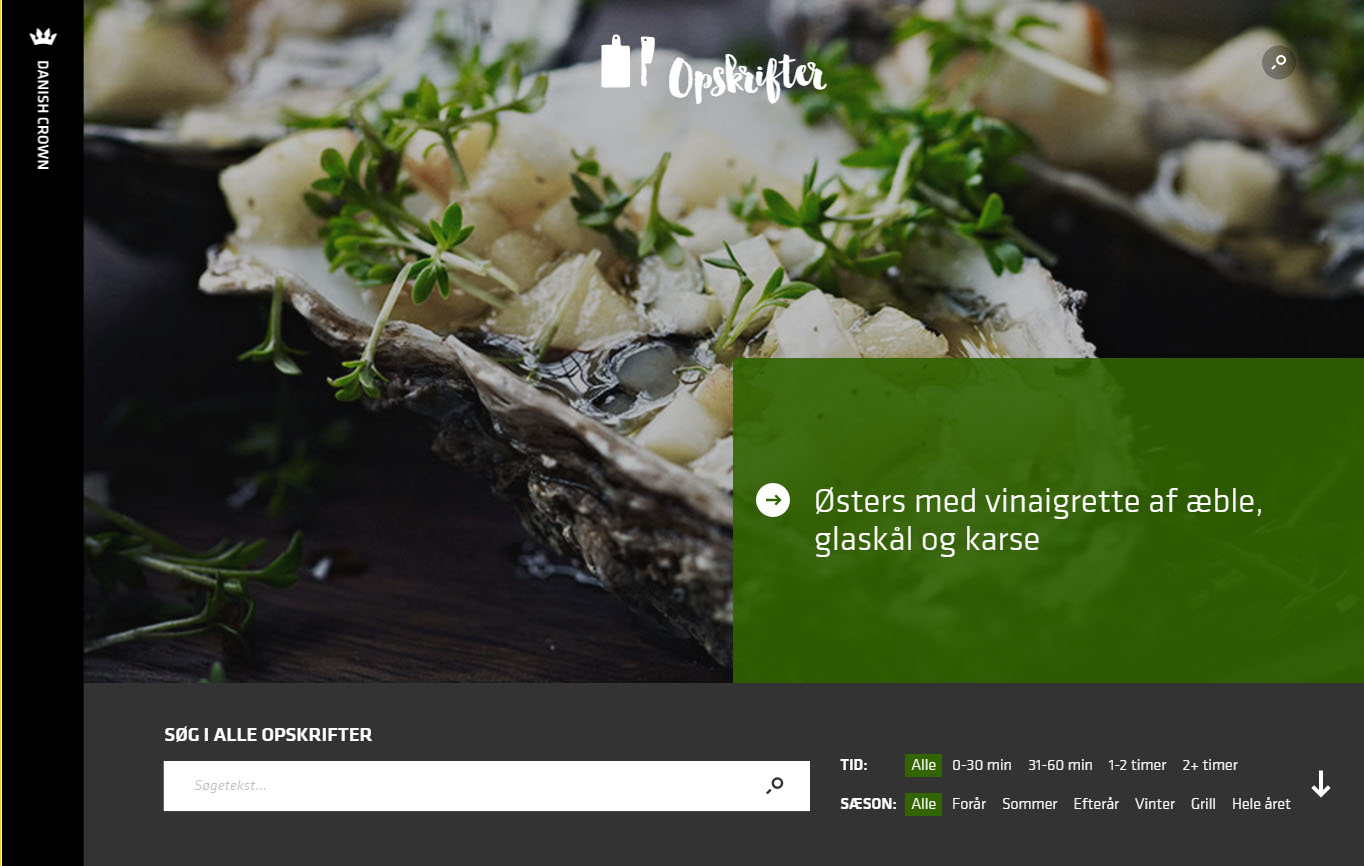 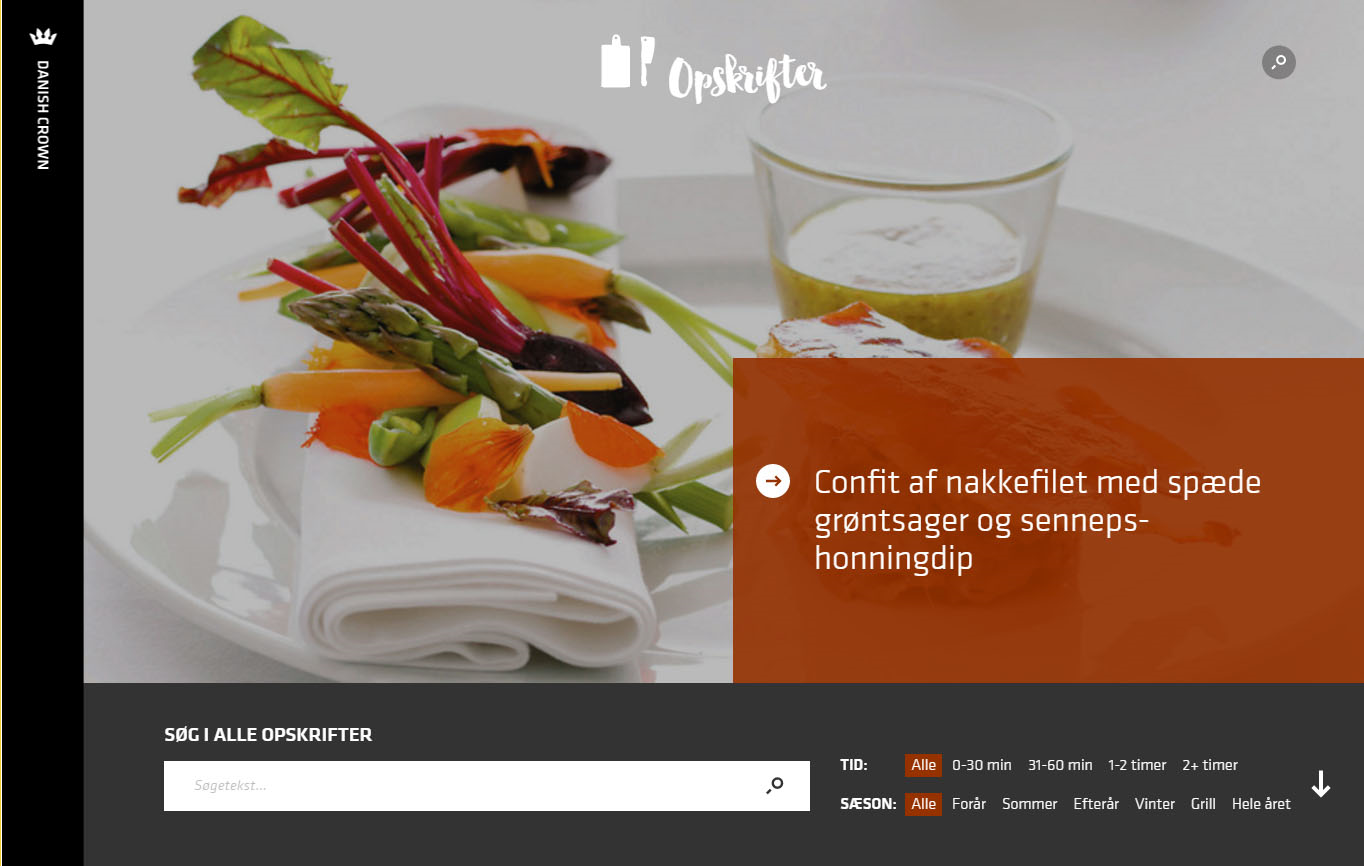 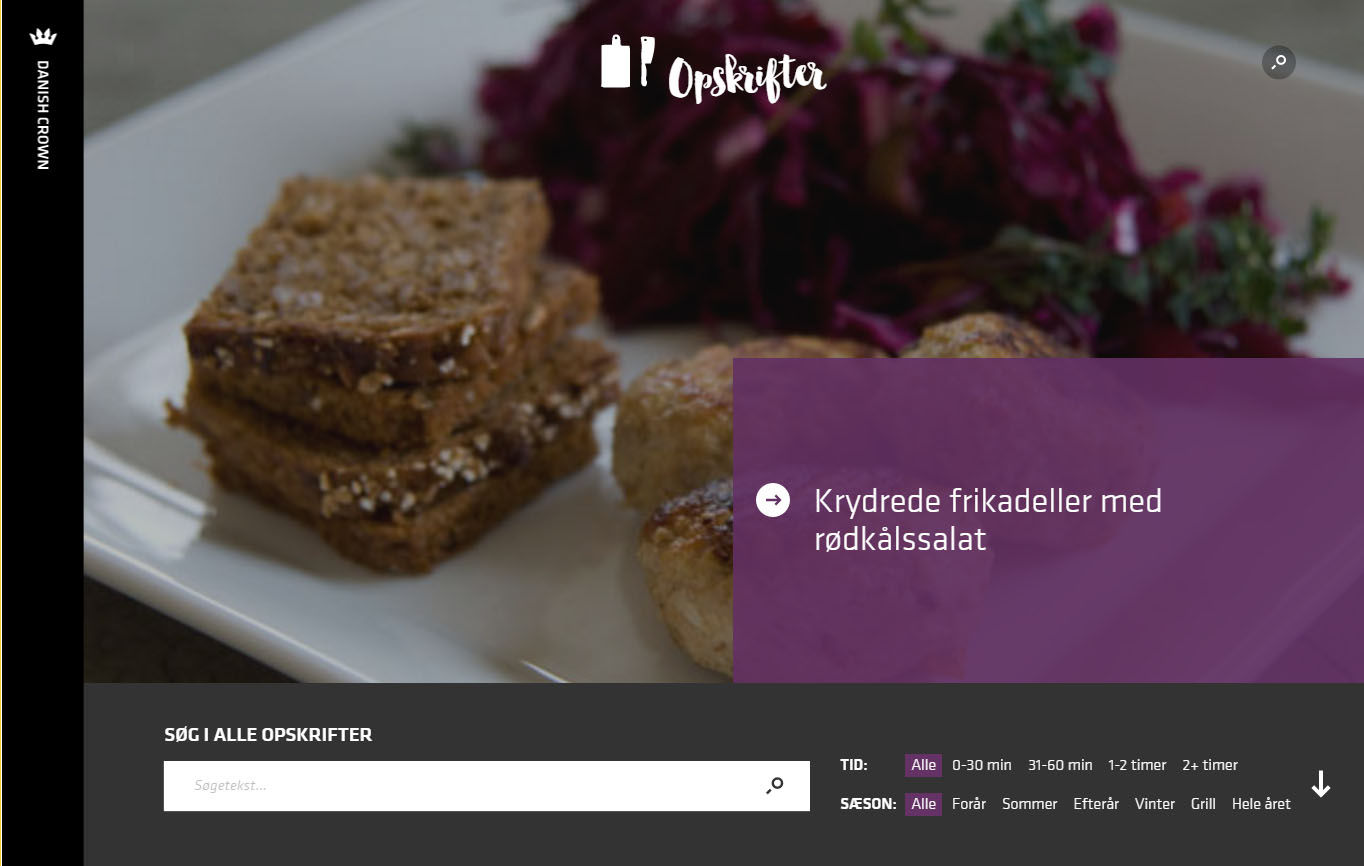 If we look at the code behind, the first step is to extract the color of each pixel of a given image. There are probably multiple ways to archive this, but I went with the Bitmap class in the System.Drawing namespace/assembly. My initial code for this would then look like:

The colors are added to a dictionary including a counter, so we can keep track of how many pixels are using a given color. With this code, I quickly discovered two things:

One of the things I then added to the process, was grouping of similar colors. Looking at the colors using the RGB color model, I would then group colors within similar color ranges. This would mean that a color like rgb(239, 239, 239) would be grouped with and considered equal to rgb(255, 255, 255).

In lack of a better word, I added a fuzzyness parameter describing how similar colors should be before they would be grouped. The updated code would then look like:

For most images, a good value for fuzzyness seems to be 25. However for the case with Danish Crown, I ended up setting fuzzyness to 50 (more colors are grouped).

Until now, we have only looked at the colors using the RGB color model (red, green and blue). Another color model is HSL (hue, saturation and lightness), which describes colors in a different way.

In HSL, saturation represents the amount of color, and is described as either a decimal number (from 0 to 1) or as percent (from 0% to 100%) - eg. a grey color would have a saturation of 0, while the orange Umbraco color has a saturation of 1/100%.

At Skybrud.dk we have created the Skybrud.Colors package for working with various color models. The package contains a RgbColor class, which can be converted to an instance of HslColor - and of course the other way around.

The package also contains a helper class called WcagHelpers with a few static methods for finding the contrast ratio between two colors. WCAG (or Web Content Accessibility Guidelines) is a standard with various steps for improving accessibility on the web.

With our Skybrud.Colors package, I have implemented a MostUsedColor class that can be used for further calculations:

For the recipes, we wanted to exclude very dark colors, which could be achieved by excluding colors with a saturation below 0.15 and a WCAG contrast above 10 (other numbers may be better suited for other types of images).

Since the text in the box is white, we also wanted to exclude very light colors. In a similar way, this was achieved by excluding all colors with a WCAG contrast ratio below 4.0.

The updated code looks like below. Notice that it is also favorable not to look at all colors found in the in the previous steps. In our case, I only look at the 25 most used colors. Finally the primary colors are sorted by the WCAG contrast ratio in descending order - that is; colors with the highest contrast first.

With the code so far, primaryColors will contain a number of colors with the highest contrast to white. The first color is then used for the background color of the info box.

However since we're excluding some colors, you might end up with a no valid colors at all (eg. if you have a greyscale image). So you also need to specify a fallback color as well.

I wrote a little helper method for creating the thumbnail:

A good thumbnail could have a width and/or height of 512 pixels. That should give an acceptable performance, and still keep enough quality in the thumbnail image.

While this article so far only has been targeting .NET in general, we can also integrate this in Umbraco (again, there are multiple ways of handling something like this).

We have another project, where images are automatically analyzed on upload, and a combination of the most used colors and the primary colors of the image (found via the HSL/WCAG validation) are saved to a single property on the uploaded image.

Since we want to hook into media uploads, we first need to register an event with Umbraco. We can do this with creating a new class that inherits from Umbraco's ApplicationEventHandler class, and then override the ApplicationStarted method to hook into Umbraco's MediaService.Saving event:

And the implementation of the MediaServiceOnSaving method could look like:

In this method, we're looking at media when they are being saved in Umbraco. Technically this event can be called for multiple media at once, so we need to iterate over them. Since we also only want to look at images, and not other types of media, we can check against the alias of the media type.

Finally, we're calling the CalculatePrimaryColors in our SkybrudMediaUtils class. This method will run the steps as described earlier in this article, and then save a list of both the most used colors and primary colors to a single property on the image.

How about a property editor?

To let editors see (or change) the primary color, we've also created a property editor that looks like as illustrated in the screenshots below.

So with an image of a colorful bird, our code will find a list of most used colors - which are mostly lighter colors, and probably comes from the background of the image. With the elimination "algorithm", the first valid color is the red color from the bird itself. 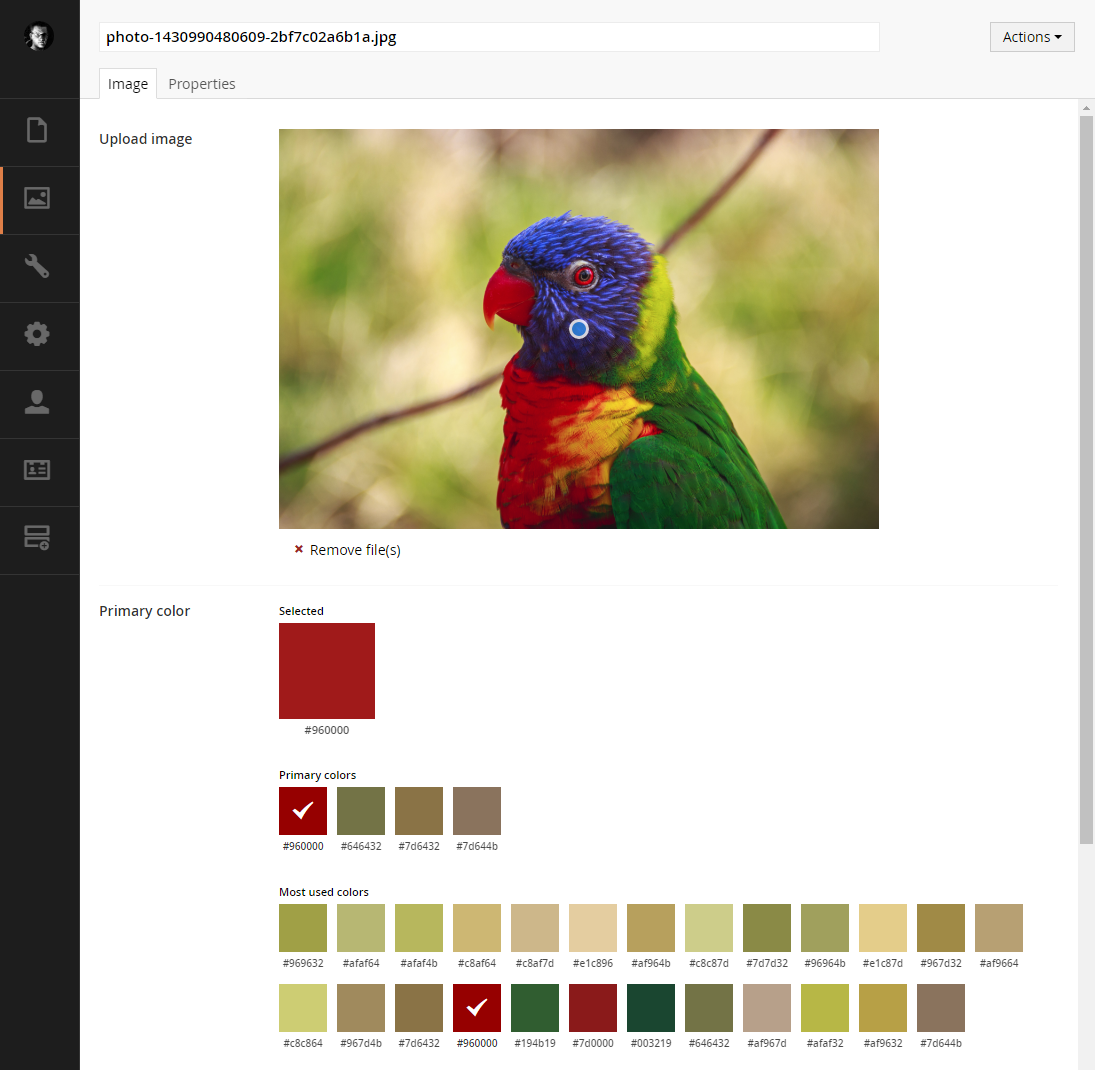 However the color with the highest contrast isn't always the one you would expect from looking at the image. Eg. if you see the image below, the green from the grass is the first color according to our primary color algorithm, while the red from the shoe is only the second color.

While the algorithm could probably be tuned some more, the property editor could instead just allow users to select one of the other colors. 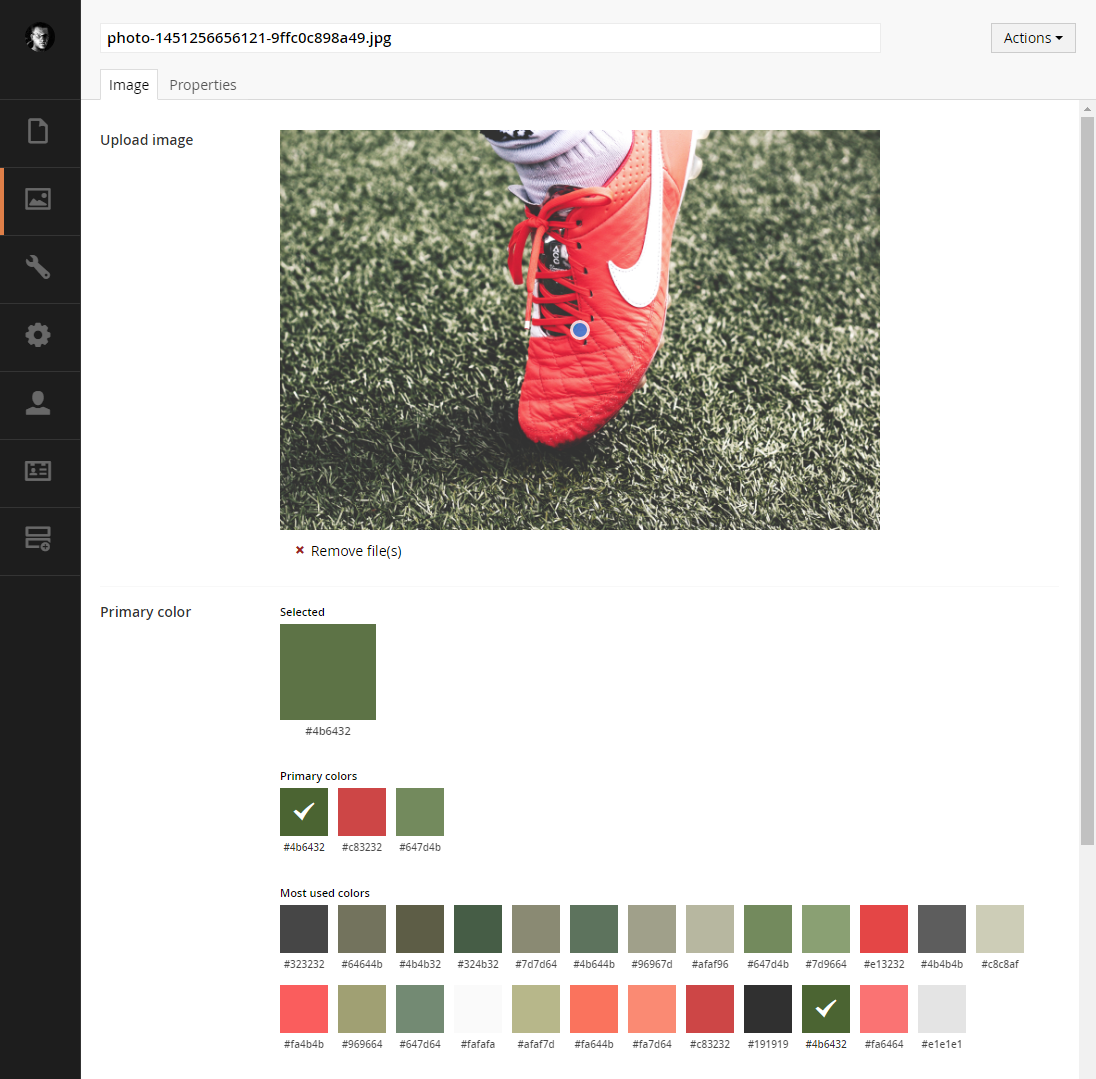 The property editor shown above is available for download via the Skybrud.Umbraco.PrimaryColors package. However keep in mind that the package itself doesn't update the property value with the colors - you'll have to setup this part manually (eg. by using the examples from this article).

Examples are good, but they might not always show the full picture. So I have also created a demo solution that you can play around with, see how things works etc.

You can find the demo solution in this GitHub repository. The username and password for Umbraco are skrift and skrift1234 respectively. Just open the solution, build and then press F5 ;)

The solution includes a few pages showing how the value of the property editor can be used, all integrated into the Fanoe starter kit. 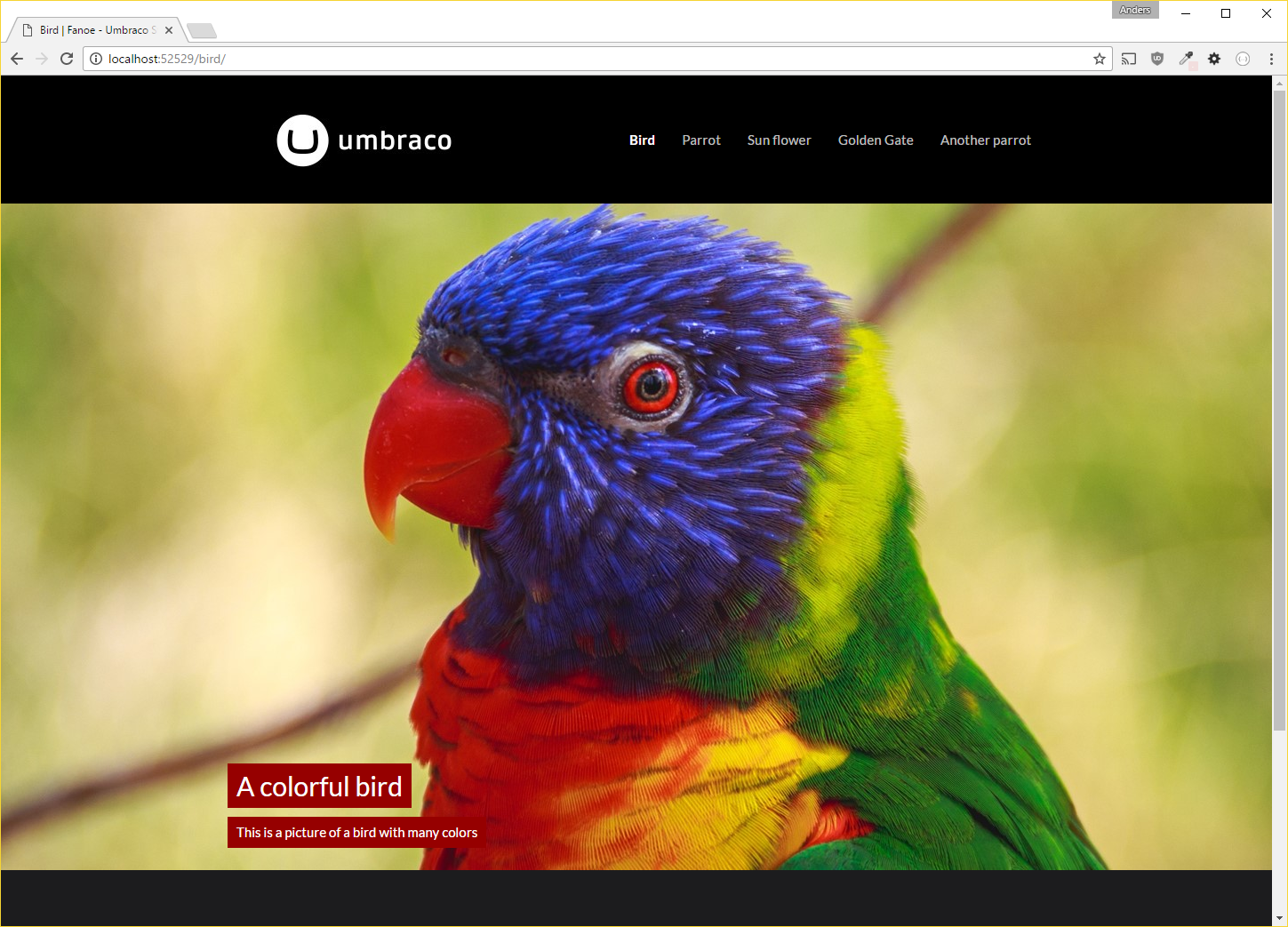 The stock photos used for the property editor screenshots and also available in the demo solution have all been downloaded from Unsplash.com.