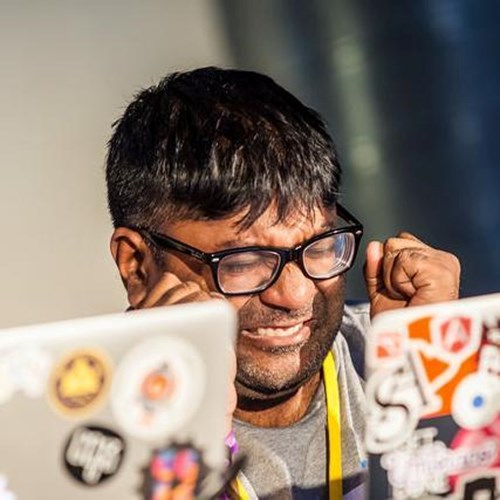 There are many ways to get involved in Umbraco – you can contribute to the core. You can bug test and report issues, and raise feature requests. You can  develop packages or functionality that are brilliant like Tom Fulton, Hendy Racher, and James Jackson-South. You can answer questions on the forum. And if you are brave and/or stupid, you could participate in CodeGarden Bingo (though I suggest not volunteering for anything involving electroshock, it is genuinely not as much fun as it sounds).

In my case I made a choice. I decided to become part of the London Umbraco User group.

Why did  I take the red pill?

Well, It’s a little known fact that I originally went to University in order to learn biochemistry. Once I graduated I could have be one of those guys manipulating DNA in a shiny lab, wondering if I could take the DNA out of a frog and make a giant super sized killer velociraptor. Well, apart from the ethics and the perpetual boredom of pipetting 25 ml of 2.0 molar solution A into 25 microlitres of 0.25 solution B, and then waiting for a week to see if something actually worked. At this point I was lucky and sort of fell into web development, and was happily coding away.

How did I get here?

It’s an even lesser known fact that before I became an Umbracianista I was actually a Sitecore guy. I spent two years running and developing sites in Sitecore when I took a job at this upstart company called Fox International Channels. They had chosen Umbraco – this other Danish CMS – as their platform of choice, and I thought once I had had the training and so forth it would be good to really get to grips with this thing.

Now we haven’t really got to discussing Umbraco yet, and I understand. But I really want you to find the fact I was so far removed from Umbraco and am now a “true believer” is as important to my journey as a member (and now assistant organiser) of the London Umbraco Meetup group.

Fortunately, Cogworks, one of the early Umbraco Gold Partners threw a five year birthday and "conference" on BOAT, a conference venue moored permanently on the Thames. (I am just going to say Lonely Island and T-Paine)

While the conference and talks were all entertaining and interesting (though some were a little (massively) over my head), what I really remember was the people. Warren Buckley, chatting to a pre-beard Matt Brailsford and Lee Kelleher, and also this very young intense shaven headed programmer who'd just given a talk and was talking at a hundred miles an hour.* I remember the genuine enthusiasm of the people.

Some of this may be the beer and the gentle (it wasn't that gentle) rocking of the boat, but the fact was that you could just chat to anyone was way different than other conference experiences I had prior to that point.

I may have already been hooked before this, but what actually got me was the mention of a monthly group meetup to learn more, meet people, and possibly talks and presentations. I actively remember thinking this would be a good opportunity to learn and meet these developers, soak up knowledge, and make contacts.

And it was only one night a month.

As with all new things there was curiosity and we had quite a few people turn up. Soon we even had to move the event from the original location to a slightly bigger location** and for the first three or for months it was easy: we published a date on Meetup, we would turn up, and apart from the general wandering round trying to find people based on usernames or arcane Twitter handles it was all good. Apart from the fact that the local Masonic lodge decided that they would have their events on the same day, meaning a massively crowded pub, long queues, and not enough elbow room to chat.***

The beginning of the end.

If this was a traditional three act story, here is where we face disaster as our world is turned because we have chosen the easy path and not the harder but righteous path. And this is the case, if you do not keep attending and assume that people will just keep coming you will face attrition and loss of enthusiasm and loss of people. It’s not anyone’s fault but the lack of talks, the occasionally last minute cancellations, or changes of venue will all have their impact.

If you genuinely want a thing to succeed you will pivot, you will learn, and you will respond.

In our case, the answer came from the community itself.

Three years ago, Laurence Gillian (VoodooBytes) and Hendy Racher suggested we should have a Christmas party. I was made a assistant organiser for this, and as such have stayed that way since.

The actual Christmas party was a success. We had some great cheesy tunes, a little private space, fifteen people, and some excellent scotch eggs including a very good vegetarian option****. In fact it has been so successful we now have it annually (think about that).

It’s always the simple ideas that are the best, so don’t stand there. Do something about it.

Whatever you do, as long as you have one other person keep the meet-up going. There will be days like this, so for those days, Patrick, Jeavon, Hendy, Laurence and Benjamin... gentlemen, I thank you. Without your support and general willingness to turn up have a beer chat and occasionally go for an impromptu curry/Mexican or Thai feast, there is a good chance that we may never have made it through the difficult middle period.

It was slightly lost in the mists of time, but there was a definite interest in getting people to do talks and having a variety of events. To this end we have one specific member to thank for reminding us of this and giving us the re-energising kick.

With her pushing, and occasionally speaking, we have been getting more speakers and the numbers of people we have attending is going up. We also now have two set events including:

Also, the Christmas party and third annual Umbraco pub quiz (and yes like the previous two years  there will be prizes!)

There is a third event in the offing, but it is not yet set.

Okay so we have done well, we have made it for five years, it was fraught now its golden, we relax… right?

It is obviously a no. Now we have to work just as hard to maintain the profile and make this something everyone would like to come along to, and I am open to suggestions for bigger venues and more speakers. Talk to us and give us the feedback at the meetings, or drop us a note via the meetup group. Mention it and we’ll see what we can do, and how we can do it.

So “how did I get here?” Redux

I often wonder sometimes about the road not taken, but then I realise that it’s a futile, self defeating exercise. It’s better to dwell on the good stuff and realise the truth in that. So I pinch myself that in five short years I went from not really knowing much about Umbraco to now being assistant organiser of the Umbraco London meetup, a fervent advocate of Umbraco if it’s the appropriate solution, and most importantly I have met and made friends with a lot of good and clever people.

So here’s a little short hand to help you:

Special thanks to Cogworks for starting me on this road. The next London Meetup is Thursday July 16th. It’s being held at:

* Yes, this was my first meeting with Benjamin Howarth.
** Bigger isn't better.
*** Choosing a venue and time is almost as important the actual talks.
**** Do something different. give people an excuse to come back and say “Ooh it’s a bit different!”

Also in Issue No 4

Letter From The Editor: Umbraco and the Other Half