Letter From The Editor: Welcome To Skrift 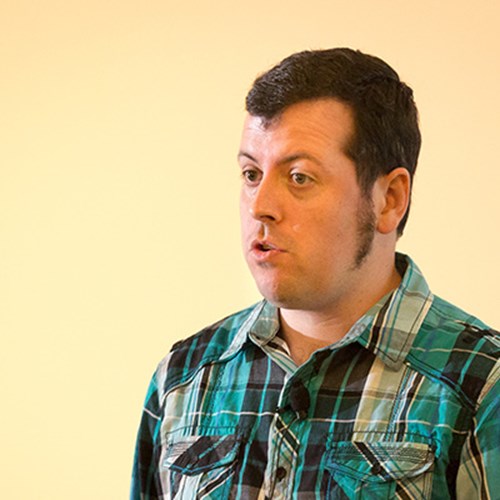 An Umbraco Developer Enters A Bar

I had been standing for about five minutes in a strange hybrid hallway/bar that led from the hotel’s escalator to its lobby. It was as if at some point an architect realized he’d left no room for a hotel bar, so cut a counter in the wall, stocked it with liquor, and put some tables and chairs in the center of an otherwise perfectly normal hallway.

My purpose for standing in this dual-purposed space wasn’t to walk from point A to B, but instead to stand guard for uWestFest 2015’s pre-conference social. As a representative of the conference’s organizers, I had been selected to help flag people down so they would know that they had found the right place.

The only problem was I didn’t know who to look for. Most of our attendees were newly graduated Level 2 Umbraco certified developers, or Umbraco professionals from around the country that I had never had the pleasure of meeting. Only about a dozen of the attendees I had met at prior Umbraco events, and most of them would be late arrivals due to their large gathering accidentally bogging down a local brewery’s kitchen, slowing down their dinner. So I was looking for strangers, doing a quick judgment call on people as they passed me.

Is he looking for an event somewhere around here? Does she appear to be lost? Is his t-shirt something an Umbraco person would wear?

In the end, I was found first.

“Yes!” I thrust out my hand with an attempt at confidence to a fellow with brown hair, a beard, glasses, and a smile.

“Do I know you?” I queried with a good deal less certainty a moment later.

“No… I don’t think so,” he responded, “But I know you from your website. You’re with Mindfly, right? I’m Chris.”

Chris was from Canada. He was, sadly, our only attendee from Canada. (We had two developers from Suriname show up, which is a good deal farther away, so I think I’m allowed to make fun of Canada for not sending a larger contingent).

It turns out that he likes beer, and Umbraco. So he and I had a lot in common. He had also been to Codegarden, where he had met other members of Mindfly.

Codegarden is almost mentioned like a holy city by Umbracians. An event you needed to attend at least once in your life on a sacred pilgrimage to drink the same Copenhagen waters as Umbraco’s creators. He asked if I had been there.

No, I have sadly not.

You will always be asked this at an Umbraco gathering by those who have made the pilgrimage before.

“Have you been to Codegarden?”

If you have not, you must indicate such with great longing and suffering in your eyes.

“No, I haven’t,” sigh deeply if you can. Or perhaps show great pain in your face. At this point the one asking takes on an enlightened expression and attempts to explain exactly why you must.

They will fail to find the words, other than maybe one consistent refrain:

"Community," they'll tell you, "It's all about the community."

Yes, Umbraco the “Friendly CMS” is all about community. I’ve used a lot of CMSes, and a lot of frameworks, and many other digital products. For none of them have I found their communities to be about the community. They’re about the code.

With Umbraco, I’ve always felt like the code came second.

That sounds horrible, doesn’t it? That we might care more about one another than we care about the product that brought us together, that is a foundation for our professional lives?

The next person to join Chris and I was someone we both knew immediately: Niels, Mr. Umbraco himself. We tried, and partially failed, to not be overwhelmed by his celebrity-hood, with his scruffy face, mussy hair, and jeans, t-shirt, and suit-jacket combo.

If I had the exact same look going, people would assume I’d had too much to drink and roll me out onto the street. With Niels it gives him a vaguely Tony Stark-ish eclectic genius vibe.

Niels was as friendly as anyone could hope, eager to join into the conversation and looking forward to an evening of meeting new faces. And a lot of new faces were. Before the night was out, there had been at least fifty new people that I had never met that passed through the lounge, each enthusiastic about Umbraco, and the people in it. Each warm and conversational and excited to be a part of something.

It was a great night. An excellent kickoff to what I like to pretend is the “American Codegarden”, where we learned and taught and shared lessons and stories about Umbraco. By the time we all went home at the conference’s end, we had made new friends, new connections that energized us.

We were a community.

Those of us who made the long journey back to the ever-rainy city of Bellingham were even more addicted to the Umbraco community than we had been before. uWestFest had changed us. There’s something special about feeling involved with this group of people working on this CMS. I can’t define it other than to say that I have constantly met amazing people that make me feel happier just knowing them, and they’re always willing and able to help me when I become bogged down in a code quandary or get lost in the marsh of Umbraco’s back office.

It made us want to do something more. To give back. To stay involved more deeply in the Umbraco community all year long.

And what we came up with was Skrift.

Skrift is an online magazine that functions as a community addendum for Umbraco.

I like to think of it as a tasty wafer that you can slip underneath the nougat goodness of Our Umbraco before coating it all in the delicious chocolate that is other Umbraco community resources like uHangout. It’s there to complement and enhance, not replace.

And how does Skrift do that?

Every month we will present two new articles from members of the Umbraco community on a range of topics from technical tutorials to use case studies to advice on the secrets to living a good life.

We’re also constantly digging around for the most recent discussions, articles, and forum posts being written about Umbraco elsewhere on the web. And we’ll be providing links to a curated list of the most interesting tidbits, along with information about new packages and upcoming Umbraco events, so that you can go see the best of what others have to offer.

Come by on the first Tuesday of every month for a new issue, or sign up for our Skrift newsletter and we’ll do the heavy lifting and push it to your inbox.

The Skrift team is small, but powerful.

Erica Quessenberry is our creative director and an editor. If it’s on the site, and you’re looking at it, she designed it. Not just how it looks, but how it feels. How you use it. I wish I could explain how amazed I am by what she’s done with a month’s worth of sleepless nights, because I lack the lexicon to describe what makes something look and feel great. All I know, is that if it does look good, it’s her fault.

Janae Cram is our chief engineer and an editor. She doesn’t just write code, she architects with it. I’m a fair hand at coding myself, but when it comes to the ins and outs of Umbraco I spend far more time breaking it and she spends far more time making it sing. She arm-wrestled Articulate, beating it into submission, and insisted that we don’t cut corners, coding it right instead of coding it quickly. Thanks to her hard work, Skrift is likely to keep running long enough for a second issue.

Our art is by the one and only Stacey Bayse, who has the audacity to be both a talented artist and a proficient coder. I’m the kind of person that hopes that someday I can do one thing well. She’s the type that manages to juggle many, and thrives at it. She also has a cat roughly the size of the Chrysler Building. Seriously. I’m reasonably convinced it’s an unusually shaggy tiger with hair dye.

Lastly, there is me. Kyle Weems. I’ve been coding from a young age, and never felt more involved in a community than I have with Umbraco’s. I’m very proud that I can be part of a project like this that, hopefully, gives back to the people that gives so much to us. My title is Editor In Chief, but really I’m more like the Chief Cheerleader. I’m cheering on the Skrift team for their amazing work, and scouring the globe for talented Umbracians to drag in front of the masses with a new article so that I can lead another cheer for them.

Doug Robar talks to us about the secrets to living a good life. Adapted from a presentation he gave at both Umbraco UK Festival and uWestFest, I found what he said to be profound, thoughtful, and life-changing. It’s too easy to get caught up in the office grind, to be pushing for the next code release, and to mistake being busy or being well paid for being successful. He focuses on another metric: a life well lived, and it’s a worthwhile read by anyone alive.

Dave Woestenborghs, whom I consider to be one of the most talented developers working in Umbraco 7’s new Angular-driven back office, hearkens us back to the good old uComponents days by walking us through nuPickers, a handy new package for handling advanced picker-related scenarios that will crop up frequently on Umbraco sites. There is a lot to learn, but he carefully takes us step by step, leaving no man behind as he presents a solid case for why nuPickers should be part of every Umbraco developer’s toolbox.

Do you want to participate, or talk with us? We’re hoping you do. We’re always looking for new authors with something interesting to say. You can check our submission guidelines page to get the details on how to submit. You can also send us tips about cool new discussions about Umbraco elsewhere, or upcoming events, or even cat gifs if you want at @skrift_io on Twitter. We also can be reached via email at hello@skrift.io.

Also in Issue No 1

The King is Dead... Long Live the King