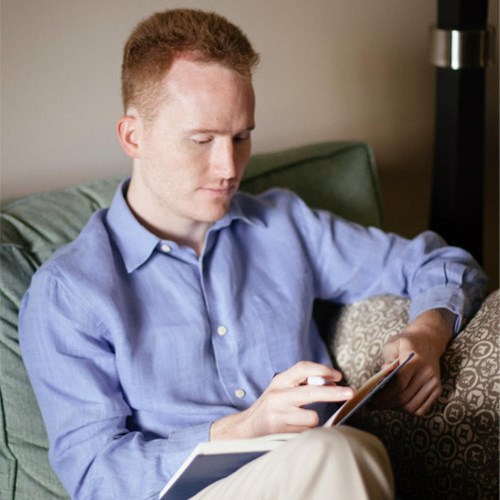 Properties on a model class that are dynamic, case-insensitive, and fault-tolerant.

Formulate Pro comes with a feature called Designed Emails. As part of this feature, I wanted to make it as easy as possible to create a Razor view that would be able to access data submitted with a form. The idea is that when a user submits a contact form, you can send them a nice looking email that contains some of the field values they entered.

Since content editors might fiddle with these Formulate fields, I still wanted the emails to send even if some of the field alias or names got changed. On top of that, I didn't want the programmer of the Razor views to have to worry about the exact case (i.e., uppercase or lowercase letters) of the field as it was entered in the CMS (in the Formulate form designer).

This is why I decided to implement resilient dynamic properties.

In short, resilient dynamic properties allow you to access the properties of your model with the following goals:

If this reminds you of something, you aren't alone. This is similar to how properties work in JavaScript. If you have an object in JavaScript, you can access properties on it dynamically, and those properties are fault-tolerant (i.e., undefined will be returned on any property that hasn't been set). JavaScript is still case-sensitive, but it is otherwise very similar to resilient dynamic properties.

In Formulate Pro, you can access the value of the first name field from a form in the following way within a Razor view:

Similarly, all of these will return the same result:

If you aren't a fan of typing all that, you can shorten it a bit by assigning the values object to a variable:

Supposing a content editor removes the "Last Name" field from the form and changes the "First Name" field to instead be called the "Full Name" field, none of the above code samples would throw an error. Instead, a null value would be returned. This will allow your emails to continue to work until the problem is corrected.

That works fine in C#. However, the following would not compile in C#:

While an expando object facilitates dynamically adding and accessing properties, you will be unable to do so elegantly without assigning that expando object to an instance of type dynamic. The inverse is also true. That is, the following code will compile, but it will throw an exception at runtime:

The dynamic type obscures the underling type, so the compiler doesn't know the property you are attempting to set and get does not exist.

These two features alone will not get you resilient dynamic properties. For that, you need to go a step further.

Pulling Back the Curtain Behind ExpandoObject

If you look at the definition of the ExpandoObject class, you'll see that it implements the IDynamicMetaObjectProvider interface. This is the interface you need to implement if you wish to provide similar dynamic properties. In other words, ExpandoObject isn't all that special; so long as you create a class that implements the same IDynamicMetaObjectProvider interface, you will be able to create an object that allows for dynamic getting and setting of values based on whatever arbitrary logic that you want.

While you could probably implement the IDynamicMetaObjectProvider interface from scratch, it seemed a bit daunting to me personally, so I opted to find an easier way.

The easiest way I could find to implement the IDynamicMetaObjectProvider interface was to rely on a NuGet package called MetaObject. When I built Formulate Pro, I made use of this NuGet package when implementing the SafeExpandoObject class, which is my custom version of ExpandoObject that allows for resilient dynamic properties. Here's the first step of what that looks like:

This is only a first step (while the interface is technically implemented, there are some extra steps to implement), but this shows how easy this NuGet package makes implementing your own ExpandoObject; virtually no custom code is necessary, as it handles all those complexities for you. Here is Formulate Pro's implementation of SafeExpandoObject, minus the code comments and a few unnecessary functions (for brevity):

If you like, you can also subclass DynamicObject rather than directly implementing the IDynamicMetaObjectProvider interface. Both approaches are very similar, but implementing the interface rather than subclassing allows your class to derive from another class, should you need to do that. Here's what it would look like if you subclass DynamicObject:

You can find a similar implementation in the documentation for .Net: https://docs.microsoft.com/en-us/dotnet/api/system.dynamic.dynamicobject?view=netcore-3.1#examples

Now that we've created SafeExpandoObject, the following is all we need to use it in a console app:

Notice that I set it with person.Name, but I read it with person.naME. This demonstrates that it is not case-sensitive. You can also go a step further:

If you run the app and press ENTER without entering a name, the person.Name property is never set. In that case, the code just outputs the name as "unknown" (i.e., rather than throwing an exception because the property doesn't exist). Here's what it looks like if you enter a name: 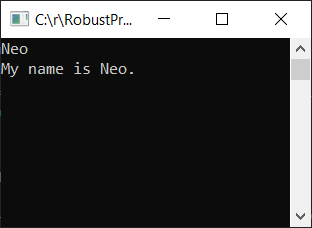 Here's what it looks like if you do not enter a name: 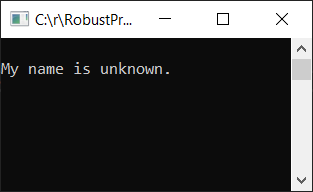 How does all this work? By implementing the IDynamicMetaObjectProvider interface and returning a MetaObject from GetMetaObject, you provide the essential building blocks for dynamic property access (sublcassing DynamicObject also provides these building blocks).

The case-insensitive implementation is managed using a dictionary with a string comparer that ignores case:

That ensures values can be accessed regardless of the case of the property name.

The fault-tolerance is managed by checking if the dictionary contains a key and, if not, specifying a fallback value:

You can use SafeExpandoObject (or your own similar implementation) whenever you need to customize what ExpandoObject does. Here are some ideas for how this might be used:

I'm sure there are plenty of other use cases that I'm not thinking of. Leave a comment below if you think of another interesting way to use SafeExpandoObject.