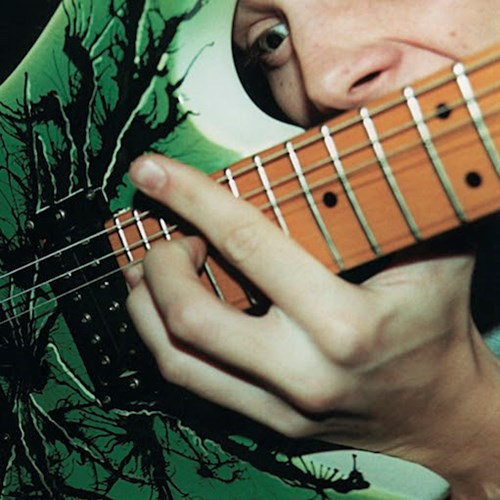 Sometimes I like to refer to myself as "Collector Of Great Moments" — in short, because it appeals way better than "Aggregator of Failures" :-) Plus, I wouldn’t think I’d ever done anything cool in my life if I just remembered all the bad moments... Granted, you probably fail a whole lot more than you really succeeded, but why dwell on the stupid things you do? (Just make a mental note of not doing that specific thing again.)

What it means, is that I've actually blocked out a chunk of my memory to keep a copy of some, in some ways pivotal, moments of time where I was particularly happy about something/a situation or where I felt I'd accomplished something cool.

So here’s an example of one such great moment for me:

"I've actually blocked out a chunk of my memory to keep a copy of some, in some ways pivotal, moments of time where I was particularly happy"

1998 — I’m on stage rigging my guitar, amp and effects board, getting ready for my final "exam" concert at the Music Conservatory in Denmark after 4 years of studying to be a music teacher. I’m the first to play that day and I’m kind of nervous — maybe because most of my fellow students were rather well-accomplished Jazz musicians by now; some of them had hired some of the teachers to play with them, so they could deliver a great Jazz performance.

My choice, however, had been from about halfway through the final year, to hook up with a drummer and a bass-player and just start playing some of my favorite songs and instrumentals (rock and hard-rock, by the way), and gradually throw some of my own in, so we could get on stage on "the final day" and be very confident like a band, which I had always loved doing.

Well, as I was standing there getting my gear ready, strumming a chord or two, deciding whether to try tweaking the bass/middle/treble knobs (a special discipline that guitar players can be seen performing endlessly before arriving at a sound very similar to what they started out with in the first place :-), I hear this awesome string of words from a guy who’d just walked into the room: "Wow, that’s a great guitar sound…"

I turn around, and see this big smile on his face and decide right then to not touch a thing, and just play…

No doubt in my mind that he just saved my day.

I honestly don't remember when I started "compiling" these moments but I know that the ability to recall them has made such a difference in my life. Whenever I feel like something's not working for me, I can zap back to a particular moment and instantly remember that I wasn't always this lousy at doing something. It helps to get me back into the groove and maybe try something different.

It's kind of like the way a specific piece of music (or a particular scent) can affect you by instantly triggering a bunch of zynapses in the brain. (By spelling that word with a 'z' there's a good chance I've just triggered some - at least if you're about my age :-)

A trait I've definitely grown from this, is that I'm inclined to lean heavily on the positive side of things, whenever possible. As an example, imagine these two very different ways to start a conversation:

"Man, you shouldn't deliver your CSS and JavaScript uncompressed and in separate files! Don't you know it's bad practice??"

"Cool, I see you didn't bother to concatenate and compress the assets — was that based on traffic data or...?"

Which of those conversations do you think will be the longer one?

There can be all sorts of reasons as to why someone did something in a different way than yours. Pretending to know which one ahead of time gets you just about nowhere in terms of goodwill and cooperativeness. Assuming for a minute that you, yourself are the one with the missing info, makes for a much better start, I've found.

Don't get me wrong, I'm not silly-happy all the time; I can, and still do, get fired up about things that annoy me, but it's usually in short bursts and then I'll probably try to recall one of my "saved" moments, to trigger a mood-change. Done!

Just to give you a better idea of what I'm "saving", here's a couple more from the pile:

Yes, admittedly, it's pretty much all "me, myself and I" moments, but that's the important part—that's their primary function; to remind me about something great. It only takes a fraction of a second to recall a situation like that, whereas had I recalled a failing situation, I could easily spend the next 5 minutes grumbling about why that went wrong. I just don't want to waste my life remembering all the things I did badly.

Without sounding too much like Remus Lupin (and you'll have to figure that one out for yourself :-), I'll definitely encourage you to do some collecting in this bright new year, and come up with some treasureous moments of your own, that you can store for easy access. And of course, I'd love to hear about them, if you feel like sharing them.